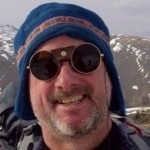 It’s been a few weeks since I’ve posted. Not because I’ve been doing nothing, actually I’ve been fairly busy with a lot of things including having a holiday and messing with my vintage Triumph Stag. The dish has progressed a bit and nearly ready to fix in it’s final position, more later.

Meanwhile working out how to actually mount the dish along with the Spid Az/El rotator became a thing that consumed my thought process. I have long since figured that the cost in time and money in building the dish is far greater than had I just bought one from RF HAMDESIGN.

It therefore didn’t take me much thought process, despite the fact I could have made my own mast of some description, to buy one from Areal-Parts of Colchester. I’m glad I did. The mast was just like putting Meccano together and was built in an evening.

There are spare fasteners of most type for that embarrassing occasion that a nut falls into the long grass and you can’t find it and should you be short John is only to happy to post out spares anyway. I had asked John for a couple of modifications that were different to the standard Alimast, which he was very happy to introduce with some kind advice just to make sure no one would be embarrassed by a misunderstanding. Great service.

The next issue was working out how to fix the mast at the designated position. As our garden fortunately looks out to the south over mostly fields it give a good view of the moon most of the time it risen. As I know the farmer well who owns the field I had actually got permission to tilt the mast over the wall. The modifications to the design were detailed for this.

This would have seen the mast hinged at the top of the wall. However, I decided that this would not be great as occasionally there would be cows in the field and this was sure to cause some damage. So I swopped one of the mounting lugs around to hinge at the bottom. Luckily the mast is symmetrical and the modifications work either way around. Probably slightly harder to raise and lower, but so far it’s been OK with the mast and the Spid rotator on a quick check. Might need two people or a winch once the dish and feed points are also mounted on top of the thing. All to determine later.

The mast was fixed to the wall and a concreate base by Simple brackets made from angle iron fixed with10mm x 100mm sleeve anchors. They’ll need painting if they are not to rust quite so quickly.

The wall turned out to be made from hollow block so they needed to be filled with cement. A concreate base was caste in situ for the base of the mast and the hinge brackets to be fixed to. I intend to reinforce the wall with angle as I suspect out IO84 weather on the West Coast of Cumbria could cause the wall to be puled over if I don’t get the thing lowered before a big winter storm.

The mast is supplied with a top plate can be cut for a stub mast of your choice or standard to take a rotator bearing. I wanted a 63mm stub mast to suite the Spid so the plate was cut for this. I actually opted for a little bit of tolerance which now means I shall have to shim the hole for a tight fit. I suspect, as the hole is laser cut, I could have just gone right for 63mm and it would have been a nice snug fit. The plate supplied is a nice neat job.

The bottom plate, or what would be the rotator plate in a standard system, was supplied blank. I spent some time thinking about how I would clamp my stub mast and had an abortive trial at a clamp that eventually would have been just a bit too weak and meant extra clamping to prevent rotation. It was to be made from 10mm plate and although I could have cross drilled with 6mm crews it wouldn’t have left much meat for strength.

I found a lump of 35mm aluminium that wasn’t big enough at first sight. Then I remembered tessellation. I figured if I routed out the two parts I could just get thee clamp made out of this rectangle.

When routing out the parts the maximum depth I dare go was 20mm as the flutes stopped at about 15mm. Regular clearing of the swarf was I felt a good idea. Aluminium does occasionally catch if there is any sort of build-up. I have snapped tools before by not taking this precaution when cutting deep. Coolant is more than just a cool idea.

To reduced the risk of misalignment I drilled 3mm guide holes right through for when I turned over to route the last 15mm.

I then spent quite a bit of time squaring up and getting the outside to the dimensions I wanted.

All that remained was for me to drill and tap for the clamping crews, fix together the two parts and bore out the hole to 63mm. To ensure that when I’d finished the clamp would actually clamp I put a washers in between the two parts. This then meant there was enough space to take up the tiny amount of slack.

Unfortunately my initial roughing out wasn’t quite accurate enough and as can be seen, what should have been a perfect couple of hemispheres have some remaining defects. I could have rectified this by taking more off those mating surfaces and re-boring. Other rectifications like reducing the overall size of the clamp by 5 mm were considered. But in the end I decided it was fit for purpose.

As it was bored at 63 mm for a snug, almost interference fit for the tube of the stub mast, once the washers were removed, clamped absolutely perfectly. A nice tight fit with about 0.5mm space between the parts just to be sure we are actually clamping.

The clamp was then drilled and tapped to fix to the mounting plate and the plate drilled with appropriate clearance holes.

And then everything put back together.

The next job is the bracket to mount the dish on the Spid rotator…. until next time.